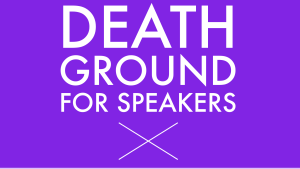 At a certain point, you’re going to have to spend money if you want to grow your speaking business.

But…if you understand the benefit of investing your money then keep reading because I’m going to give you an idea of what state of mind you need to be in to fill up your calendar.

Ground on which we can only be saved from destruction by fighting without delay, is desperate ground. -Sun Tzu

Sun Tzu wrote The Art Of War and he talked about Death Ground (aka Desperate Ground).

Death ground is when you’re put in a ‘do or die’ situation. You either make it or you don’t. It either works, or you get crushed.

But what does this have to do with your speaking business?

Most people don’t succeed because they’re not desperate enough for the success.

A lot of speakers don’t grow their business because they’re not in a position where they HAVE to do it. Maybe they have another job, maybe they have a spouse taking care of bills, maybe they have money in the bank from something else…whatever the reason, most speakers aren’t desperate enough.

You would be working your tooshy off.

So what does this have to do with advertising your speaking business?

Simple…when you spend money on advertising, you’re forcing yourself to get better…or lose your money.

Imagine if you put $1,000 into advertising every month (and there’s no stopping it…the money always comes out your bank account) What’s going to happen?

You’re either going to keep losing $1,000 every month…or you’re going to be forced to figure out how to make it work.

This is how people build businesses fast and learn fast. They put themselves into a situation where they have to succeed.

Unless you are breaking stuff, you are not moving fast enough. -Mark Zuckerberg

When Mark Zuckerberg said that, I thought it was genius.

If you only had $10,000 in your bank account…and you spend $2,000 on educating yourself (so you know what actions to take) and then $700 a month on advertising…don’t you think you would be much more motivated to make things work?

You’re either going to run out of money REALLY fast, or you’re going to book speaking gigs really fast.

And that’s what advertising does.

You either sink or you swim. You either make money or you lose a lot.

That’s what I did with my advertising.

I remember when I was lucky to get one speaking gig.

When I got an email for a gig, I was happy as hell…but of course I had to act like a pro. And in the back of my mind, I was praying for the gig to go through.

Eventually, I realized that I was too comfortable. So I started spending money on advertising.

At first it was just $500. And I lost it because I didn’t know what I was doing.

I thought…’Oh well’… I could afford to lose it (BIG mistake).

So after awhile of STILL not getting gigs, I tried it again…and lost the money…because I could afford to lose it.

But it finally hit me…I need to spend money in a way that will force me to get good really fast. So I increased the amount I was spending and the money would go in automatically so I couldn’t stop it.

I figured it out…and started getting booked.

Will you lose money if you don’t know what you’re doing? Of course you will. But you’re going to learn really fast.

Stop being so freakin comfortable.