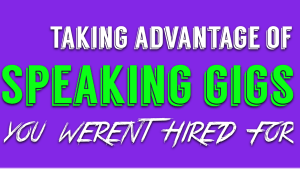 If I had to guess, I would assume that there are some speaking engagements you weren’t hired for. Don’t ask me how I know…I just do.

In this post, I’m going to show you a very ingenious way to take advantage of speaking gigs you weren’t hired for. And I have to admit, I’m giving myself a pat on the back for this one.

Very few speakers actually do what I’m about to tell you to do…because it’s not obvious. Think about it…

What do most speakers do when they see ‘Speaker John Doe’ has been hired as the motivational speaker for xyz company in October?

…The first thought is usually, “Hmm…I wonder how he got that gig?”

Most speakers will see another speaker at an event, and wonder how they’re filling up their schedule with paid gigs….but…being the business-savvy speaker you are, you need to think differently.

Whenever you see another speaker at an event (and there are lots of speakers…at lots of events)…then you need to take advantage of that speaker’s success. But how?

Let me ask you a question, what information do you get when you hear that another speaker has been hired as the ‘motivational speaker’ for xyz company? What does that tell you?

Seriously…think about it…what does it tell you?

It tells you that the ‘xyz company’ hires speakers (speakers on that topic).

And it tells you that they probably hire speakers every year for that event (company events are almost always around the same time every year).

Knowing this…how can you take advantage of the other speaker’s success?

Simple, keep track of the speaking gig…for next year.

Let me give you an example of an event from 2014. It’s 2015…and I can’t travel back in time but I can take advantage of another speaker’s success.

I see from an event I found online that they had a speaker named Dan Clark (this is a screenshot from the website’s 2014 agenda).

Now, I do a Google search to see if I can find anything on this guy. Why? Because if I can get a sense of what he charges for speaking, then I will know what the people at the event are expecting to pay.

If I see that a speaker looks like a beginner (by having a horrible website), then maybe the meeting planners didn’t pay anything…or very little. But if I see that the speaker is a pro, then I know that this would be a good event to contact.

….So I searched for Dan Clark and lucky me…

One of the first things I see is an ad from a speaker bureau. 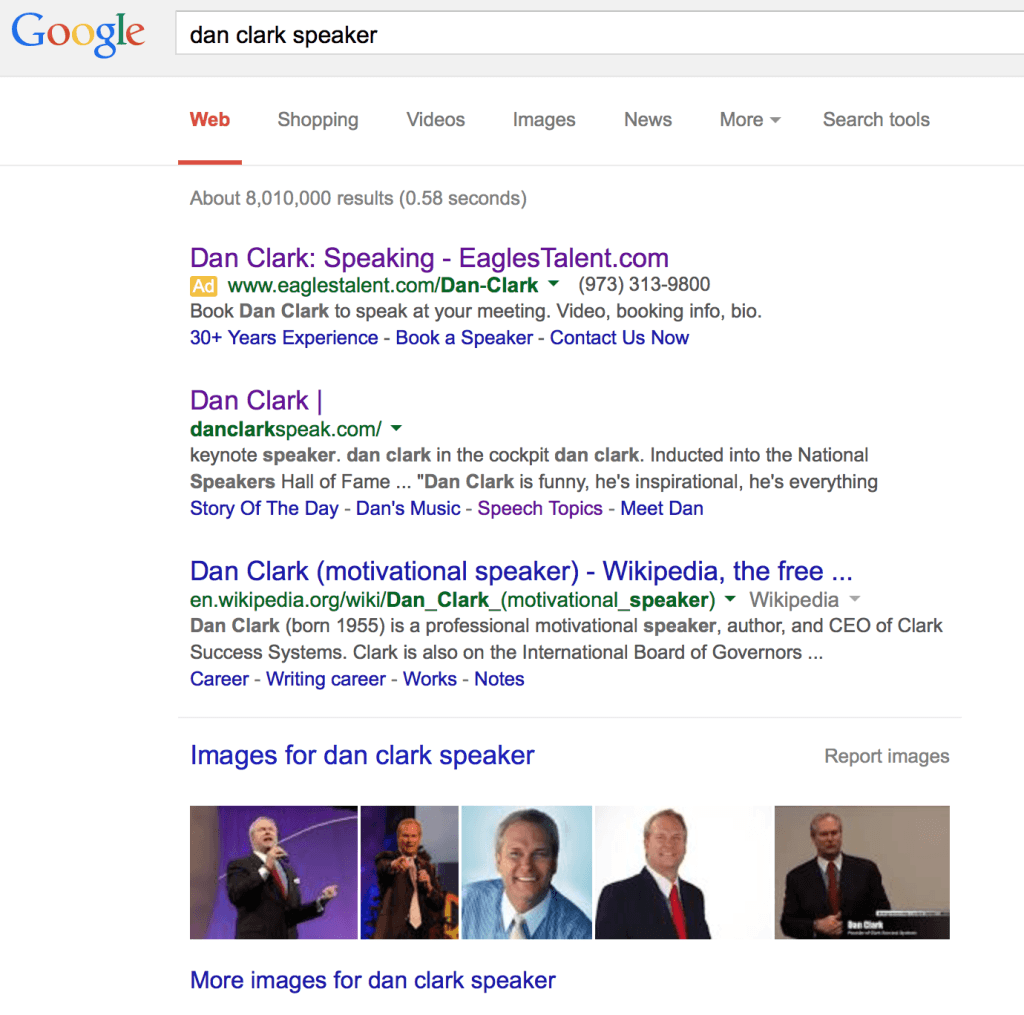 Because speaker bureaus almost always list the speaking fee…and that’s what I want to know.

If I just went to his website, then I can only guess his speaking fee based on whether or not he has a great website.

But if I go to a speaker bureau who has the speaker listed, then I can get much closer to his speaking fee.

…You won’t always find the speaker on a bureau’s website so sometimes you’re going to have a take a random guess and their speaking fee.

Your main goal at this point is to figure out if the event they’re been hired for in the past, is worth your while by finding out whether that speaker charges the same amount as you, or more (which is even better).

When you have an idea of what another speaker got from an event, you’ve now qualified the event…so you can contact them. What you DON’T want is to spend your time contacting people who can’t afford your speaking fee. And that’s why you need to find out what another speaker’s fee range is. 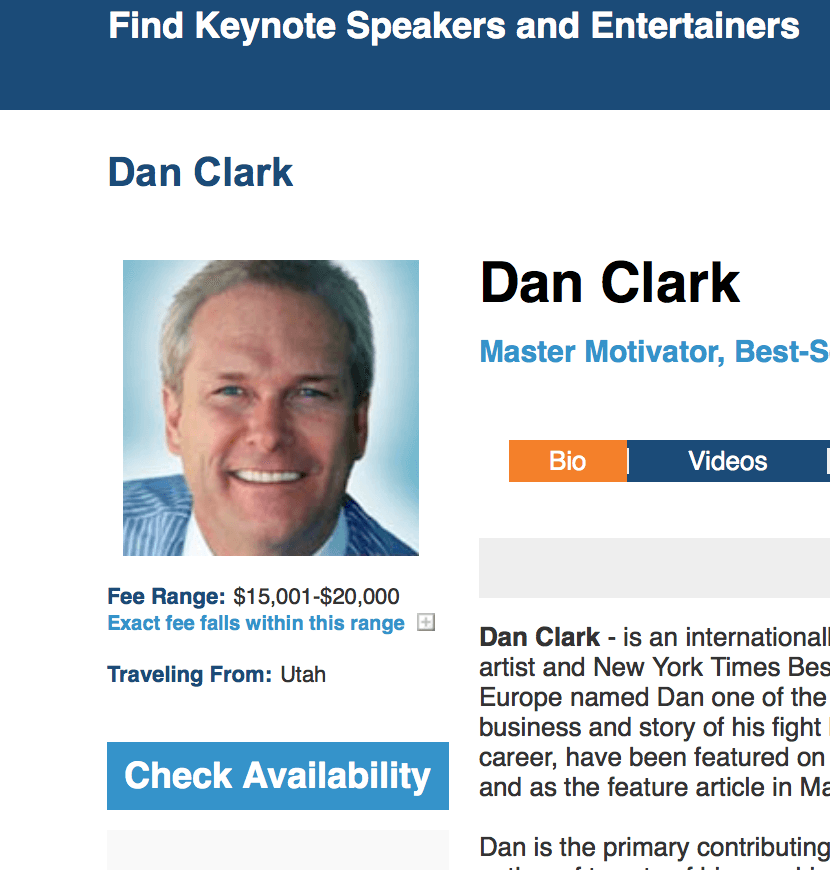 (Btw…if you work with a bureau then don’t be greedy. Let them make as much money off you as possible. If they can sell you for double what you’re asking for, then it’s your fault for not asking for more…not their fault for giving you the low amount you wanted)

After I see the speaker bureau’s page, I go to his website… 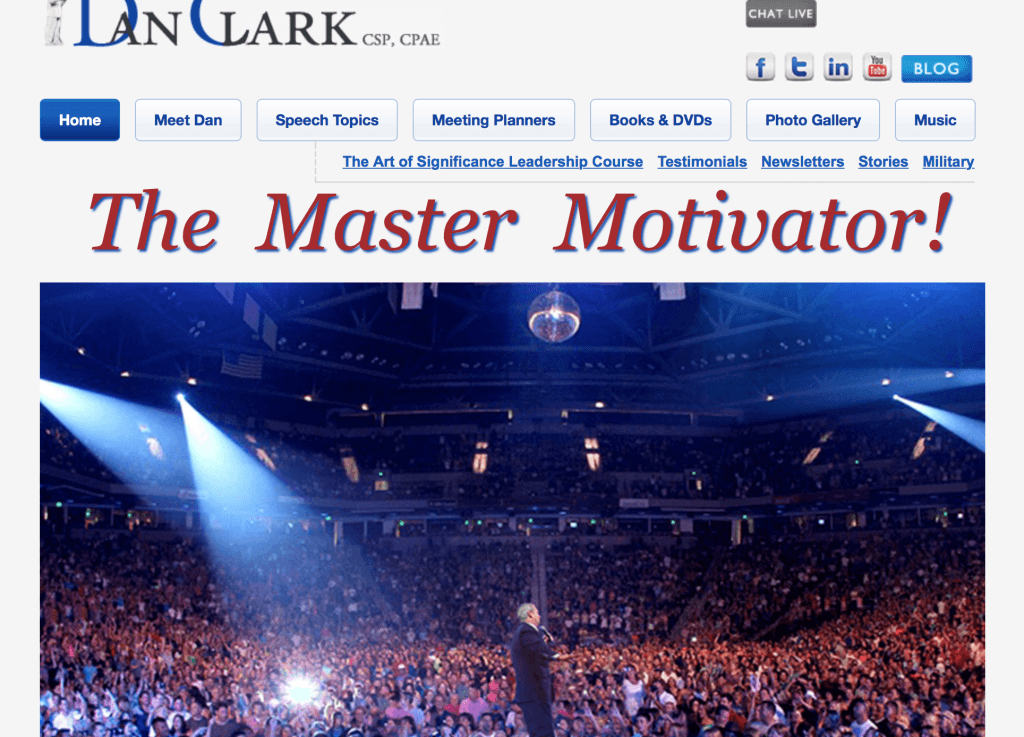 And guess what my reaction was when I saw his website?

I constantly tell speakers that your speaker-website should instantly communicate that you’re a pro. The videos, pictures, etc should scream that you’re worth what you’re asking for…and the picture on his website did exactly that.

He looks like he’s the opening act for JayZ.

After a few seconds of research on this guy…I know he’s a pro and charges a good amount.

Now, it’s just a matter of contacting people for the event he was hired for in 2014.

My job is to use one of my lead-generation systems to get in touch with the people in charge and have them look at my speaker website…then have them hire me.

But that’s just one way to do it…

I can also go to espeakers.com and search for other speakers. Why would I do this? Because on espeakers, clients can leave reviews of the speaker they hired.

Once again, I can take advantage of another speaker’s previous successes. 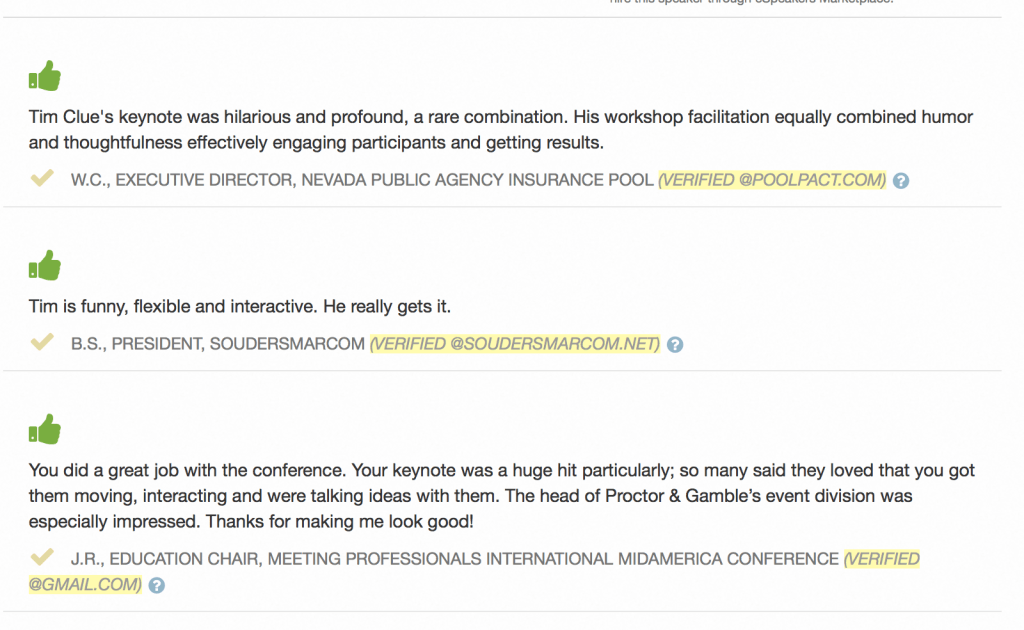 When I click on a speaker’s profile and click on ‘reviews’…I see the names/companies that hired this speaker. And guess what? I can now contact the company in the future.

When you hear about another speaker who got hired for xyz company’s event, don’t just sit there…be proactive and take advantage of it.

Finding speaking gigs isn’t a matter of doing a Google search. It’s a matter of always looking for them in everything you see.

When I see another speaker who has a list of events they’re speaking at in the future….do you know what I do?

I write down the names of those events so I can contact them later and get hired.

That’s how you take advantage of speaking gigs you weren’t hired for.