A stupid email mistake that could have cost me a $15,000 speaking gig

Not too long ago, I was contacted about a speaking gig and I made a rookie mistake (don’t do what I did).

They contacted me for an event and after asking questions about their event, I gave them the price. And that’s when I made my stupid mistake…

But before I tell you what it is…Here’s a picture of my response…do you see the mistake? 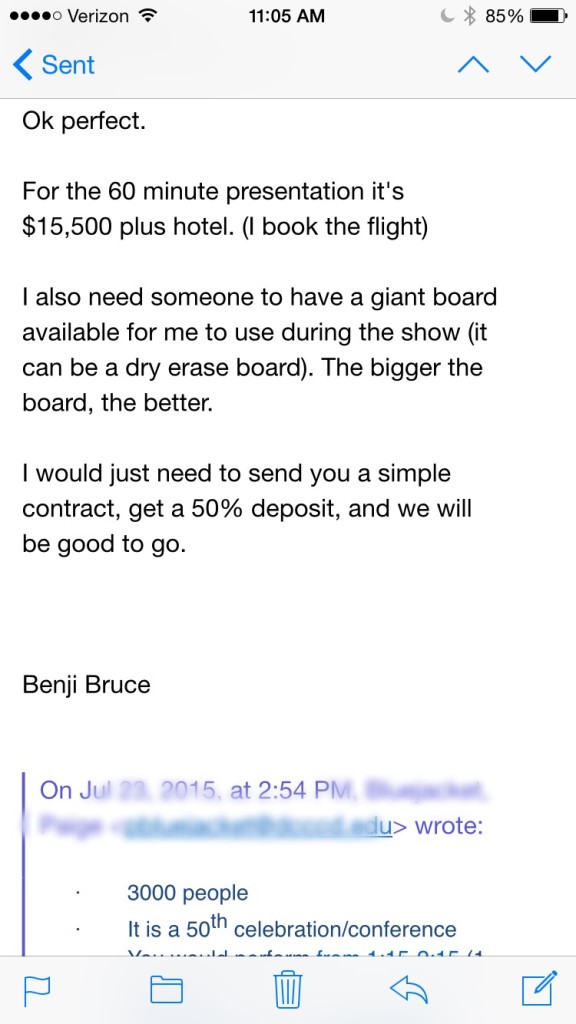 The mistake is a simple sales mistake…

I didn’t make it clear what the next step should have been.

You’ll notice that I just made a statement instead of asking a question. ANY question would have been better than no question.

Even if all I said was, “Who do you want me to send the contract to?”

This would have let me know what the next step would be because they can respond in a couple of ways.

By not asking a question when I quoted the price, it’s more likely that they won’t respond at all.

How do I know?

Because I used to make this mistake all the time when I started.

If you want to get more speaking gigs, then you have to maximize your chances of getting hired when one does come in.

So when you get to that ‘price quote.’ you have to immediately ask a question so you know where you stand.

Do they want to hire you or not?

It’s better to get an answer instead of just leaving things in the air because if you leave things in air, you’re going to wonder… “What if someone contacts me for the same date? Should I give it away since they haven’t responded yet?”

But the fact still remains…it was a stupid rookie mistake that never should have happened.