The Power Of Speaker Demonstrations Can Get You More Gigs 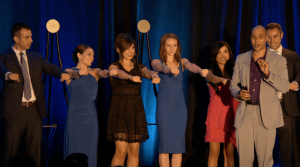 In one of the blog posts (Creating a speaker follow-up sequence)…I mentioned that you should create a demonstration that you can do…after you speak…because it’s much more likely to get you booked for other gigs.

I’m not a mind reader, how do I create a demonstration for my speaking business?

In this post, I’m going to go over why you should have some type of demonstration you can do as a speaker, and how to create one.

So what do I mean by ‘demonstration?’

Have you seen the Wolf Of Wallstreet? If not, watch it…it’s good. In the movie, Jordan Belfort is talking about sales and then he turns to one of his guys and says,

Sell me this pen.

If you’re a sales speaker, and you’re training someone on ‘how to sell,’ then do you think it’s more powerful to just ‘teach’ them…or ‘show’ them?

Showing someone is a million times more powerful than telling them.

And in the Wolf Of Wallstreet movie, he demonstrates it.

How much more effective do you think you would be, as a speaker (both on stage and off stage), if you could demonstrate what you talk about…instead of just talk about it (like most speakers)?

Lets go back to the sales speaker…Imagine I’m a sales speaker and I say, “Here are the 4 keys to selling someone anything. Number one…number two…etc.”

Boring! Every speaker does that.

Now that’s probably going overboard…but do you see the point?

Do you see why I talk so much about the mind reading demonstrations I do and why I emphasize it on my speaker website? It’s because other speakers can’t do it…and that separates me from the millions of other speakers out there.

In the blog post about Creating A Follow-Up Sequence…I mention that you should have a demonstration you can do with the meeting planner when you’re done speaking. Why? Because it lets them know that you can do more than just that one speech (so you’re more likely to get hired again)…and because it allows you to create a memorable experience with that meeting planner.

When you’re done speaking and you’re talking to the meeting planner after your presentation, by doing a demonstration, it now gives you another change to talk to them about other things you can do.

But what if you don’t read minds? How do you create your own demonstrations?

The first thing you have to do when you’re creating a demonstration is to think of something you talk about…and turn that into something tangible.

Like the Wolf Of Wallstreet, where he says, “Sell me this pen”…you should be able to take the words you speak, and make them tangible. Jordan Belfort could have said, “Here’s how you sell…you do x, then y, then z.” But instead, he took those words and made a physical version of it.

What’s something you say in your presentation that you want to emphasize?

If you’re a leadership speaker and you’re talking about ‘how leaders make quick decisions’ then you can do a demonstration involving reflexes.

If you’re a motivational speaker and you talk about ‘pushing your limits’ then you can do a demonstration where you tell them to raise their hand as high as possible…they do it…then you tell them to imagine them raising it higher and have them raise it higher…they do it…and now you talk about how they pushed their limit by going beyond what they did the first time (Tony Robbins does this).

Look at a demonstration Tony Robbins does when he’s being interviewed (fast forward to 25:18)…

…They just need to prove a point.

They need to be physical metaphors of what you want to get across…and it all comes down to how creative you are.

If your topic has anything to do with the mind, then I recommend you buy a book called, Thinking Fast & Slow by Daniel Kahneman. In the book, he talks about the mind and he gives several demonstrations that you can easily use.

You can also learn some bar bets. Why bar bets? Because you can find a demonstration with one of them and just change the words you say to match the point you want to prove.

A good book for bar bets is called… Cheats, Cons, Swindles, and Tricks: 57 Ways to Scam a Free Drink by Brian Brushwood. Or you can just go to YouTube and find a ton of bar bets.

I saw a speaker who talked about developing a better sounding voice (he does vocal training). And in his presentation, he talked about how the sound of your voice can make you come across more or less confident. Then he had a lady come on stage and told her to say what she does for a living.

She started saying what she does…and he cut her off.

He said, “Ok, now lets make you sound a million times better without changing a single word. I want you to make your voice really deep, like a man.”

Then he told her to do it again…but…to keep talking. So she kept talking, in a deep manly voice, and now he said, “Ok, now slowly relax your voice but keep the same low pitch.” And BAM…her voice sounded a million times better.

You could hear the entire audience say, “Whoa!”

This speaker could have easily have said, “To make your voice sound better, you want to do x, y, z.” But he didn’t. Instead, he just showed everyone…and everyone was impressed.

He could do that on stage or off stage (talking in a small cocktail group).

And that’s what you need to do as a speaker.

It all comes down to creativity.

What do you say that you can create a physical metaphor with?

Nobody can do this for you because only you know what you talk about. You have to sit down and get creative.

It can be as simple as, “Sell me this pen.” Or, “Raise your hand a little higher.”

Just take something you want to prove…and come up with a physical metaphor for it.

If you talk about ‘focus’ then you can do the simple watch trick.

You say, “You know what, let me show you how important focus is. Tell me what time it is on your watch?” (they say the time) “Ok, now…without looking…does your watch have a second hand?” (they’re going to be unsure) “You see, your mind was focusing on telling me the time, not on whether it has a second hand. When you focus on something, you’re creating it in your mind…etc etc”

I can’t stress how important it is to be able to demonstrate what you talk about.

If you do this then you’re going to notice your speaking gigs will shoot up and people will start talking about your presentations more because you created an experience. People never remember what you say, the only remember the experience you create.

Here are a couple of things I do after my presentation…