A simple email that made me an extra $20,000 in my speaking business 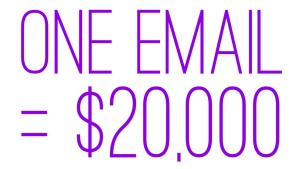 This week, I got contacted for 2 speaking gigs by the same company. They’ve already hired me before, but they have multiple company events.

When I spoke at their first event, the Vice President said that he would contact me to bring me out for their other events. Sounded good to me.

But from experience, I knew what would happen…

…I knew that he would get too busy to think of lil’ ole me.

Because he’s a freakin’ Vice President.

The higher up someone is at a company, the less likely they’re going to deal with speakers directly (unless they’re paying a huge amount…even then, it’s usually delegated). They have decisions to make that results in millions and millions of dollars going through the company. So worrying about a speaker who’s charging $10,000 or $20,000 is chump change.

And last week, I get an email from someone who reminded the VP of me when he was talking about two upcoming events. So the VP sends me an email and asks for my availability and rates.

I replied by saying,

And what happened next?

I get nothing from him.

At first, I was thinking that maybe it was out of their budget for these events. Maybe it was a smaller event and they didn’t have the money.

But…he’s a freakin’ VP of a billion dollar company.

And I’m pretty sure that the only reason he contacted me directly was because I talked to him in person at the first event.

So what did I do?

I sent him a follow-up email.

I asked him if he wanted to go ahead with the 45 minute presentation.

He said he was sorry for the late response because he was in meetings, etc.

So what’s the point?

The point is that you need to make sure you follow-up if someone doesn’t reply back. That one email, the one follow-up, is responsible for $20,000.

Don’t assume that when you quote someone your speaking fee, and they don’t respond, don’t assume that they’re not interested. Maybe they just forgot. Maybe your email went into the spam folder.

If it’s a serious speaking gig, you need to follow-up until you get an answer.

If you’re talking to the specific person in charge of the event (like a meeting planner), and they don’t respond, then more often than not, they’re not going to hire you because your speaking fee was too high.

But if you’re talking to someone higher up in the company (like the VP), and they don’t respond, then it’s usually because they’re busy and forgot about you (they get LOTS of emails).

Don’t leave the follow-up emails to your ‘memory’ because sometimes, your memory isn’t your friend. It has to be systematized. You need to set dates of when you’re going to follow-up if they don’t respond. Put it in your CRM. Or put it in your calendar.

Don’t just say, “Yea I need to follow-up.” You need to get into the habit of scheduling reminders even if your schedule is completely full. Why? Because when you start booking more speaking gigs, you’ll already have the habit and the system in place.

When you get contacted for a speaking gig, and when you quote your speaking fee, the next thing you need to say to yourself is, “Ok, what date am I going to follow-up?” And schedule it in your calendar. Set the calendar to remind you, and you’re good to go.

A single email can make all the difference between getting booked or being forgotten.