Should You Pay To Speak On Stages? 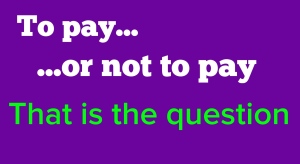 Several speakers have asked the question of whether or not they should speak for free…or if they should pay to speak on a stage.

But should you do it?

Well…the answer will surprise you.

First, you have to understand that you’re in the speaking business and this is a game of chess, not checkers. You have to think several moves ahead.

With that in mind, where are you in your speaking career?

So think about this for a second…

Lets say you get an email from someone who wants you to speak at their event. You get all excited because it’s a speaking gig…and then they say, “It will cost X amount.”

You’re natural response is to say no. Why? Because most people don’t want to spend money (this will hurt you when running a business).

So now you have to think for a second…

Do you currently have video footage of you speaking in front of a crowd (lets assume the people who want you to pay will have 200 people at the event)?

Now you know that meeting planners who pay speakers $10,000 and up are looking for video footage. The way they hire speakers is to see what they’re like in front of a real audience, so they need to see video.

Do you have the right video footage of you speaking?

You also need to ask if you have pictures. If you don’t have any of this stuff because you’re beginning, then how else will you get it?

Do you see where I’m going with this?

The longer it takes you to get video footage, the longer it’s going to take you to build your speaking business.

So should you pay if someone asks you in the beginning of your speaking career?

Instead…think of it as a marketing expense.

This is why you need to think of the speaking business as a chess game and not checkers.

Most speakers only see one move ahead. They think it’s wrong to pay to speak on a stage. But if you’re starting out, you DESPERATELY need video footage and if you have to pay to get it then you better do it.

If you don’t…well…lets just say you’ll be in the same spot 6 months from now because you don’t have video footage.

But this is also why you need to ask yourself how many other gigs you have lined up.

If you already have gigs lined up (free or paid) then just get video footage at those gigs. If you don’t have anything going on in your speaking business, then you definitely need to get on a stage.

Most speakers get so caught up in the mindset of “I don’t want to pay anything” that they don’t realize they’re slowing their business down. You have to spend money on things that make you money. The only question is…

Do you know how to make things make you money?

Now if a speaker bureau says that you need to pay then whatever you do…DON’T pay a bureau.

You should never pay a speaker bureau to be on their website. Speaker bureaus usually tack on a little extra when quoting a client. So you don’t pay to be on their site, they just take a cut from the speaker fee once they already get you a gig.

But when it comes to answering the question of whether or not you should pay to speak on a stage…that depends on what you have going on in your speaking business.

If you can’t get on a big stage then yes, you should pay because you need the video footage. If you already have gigs lined up, then you don’t need to pay.

Everything revolves around the future of your speaking business. Think several moves ahead about how you can use this to book multiple gigs.

Don’t get caught up in the “I don’t want to pay anything” attitude because that will make you go broke. Instead, think in terms of “How can this make money.”