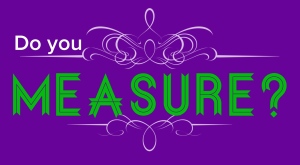 Do you know how many people you have to contact before you book a speaking gig?

If you’re selling products, do you know your cost per acquisition?

Do you know how much you can spend to get a speaking gig?

If you don’t know these numbers then you’re building a business blind.

I heard a good analogy of this from an internet marketer. He said, imagine this…

You go up to a vending machine and you put in $1…but then it spits change back out and only gives you 90 cents. So you put the 90 cents in and it spits it back out and gives you only 80 cents.

Well how many times do you think you’re going to put money in before you stop and realize that the vending machine is broke?

How many times are you going to keep putting your money back into the vending machine?

That’s what measurement allows you to do.

When you measure things, you grow. And you grow because you can visually see the growth. You can see that the money you’re putting in is creating more money for you instead of losing money. But if you didn’t know this then you would go broke.

So if you’re just getting paid speaking gigs then you don’t need to measure as much as if you’re selling a product online.

When you’re getting paid speaking gigs, you need to know how many people to contact before you get booked. If you know that after contacting 500 people, one person books you for a $10,000 gig…then what will you do with that information?

Well lets say you can contact 100 people a day. And lets say that you hire a virtual assistant for $500 a month and this assistant contacts 100 people a day. That means in about 3 days, you will have a gig for $10,000. Then you can reinvest it back in the business to grow.

And lets say you have a speaker product that you sell online.

Well how do you acquire leads? How much do you spend to acquire a customer?

Maybe it costs you $1 per lead and $10 to acquire a customer. If your book is $7 then that means you lost money on the initial purchase, but because you’ve been measuring and you know that your lifetime customer value is $200, then you would easily spend $10 to acquire the customer…you would easily spend $50…because you know you’re going to make a profit in the long run…despite losing money in the beginning.

Now if that sounds confusing then don’t worry…it is. This is stuff that took me forever to figure out because not too many people talk about it.

You have to figure out your numbers.

The level of commitment depends on you. You can figure out all the numbers or you can just create a product and wait till someone buys it.

But if you look at anyone who’s at the top, I can guarantee that they know their numbers.

Knowing your numbers lets you know whether or not your profitable.

Now what I described was more from a ‘selling products’ point of view. But if you just want to speak on stages then the numbers are a little different.

You need to know how many people you have to contact before you get a gig. And you have to do this with each lead generation method you’re using.

When you know these numbers, it gives you a sense of clarity.

I can’t stress to you how important it is to know this and the numbers are different for every business…so don’t ask what other speakers are doing because it doesn’t matter.

You have to sit down and figure out what numbers you need.

If you hired a VA for $600 a month and they book you 3 gigs a month at $10,000 each then they’re going to be more profitable than booking one gig from Adwords. That means it would be much smarter to cut your Adwords campaign…take away the $3,000 from that, and hire multiple VA’s, with that $3,000 because they’re going to be a sales team for you.

Start today by spending 15 minutes, writing out what you need to measure. Then get a ‘counter’ app on your phone so you can just tap a button and it will keep count of how many people you’re contacting in a day. Keep pressing that button until you get a gig. Record that number and that’s your starting number.

I know it’s hard to do this, it’s hard to figure out the numbers and all that stuff…but when you do it, the level of clarity you have is amazing.

Very few speakers actually do this because it’s hard. You have to figure out what numbers you need, how to get it, record it in a spreadsheet every day, etc etc…but that’s what happens when you run a business.

Measure everything and you will naturally grow your speaking business.