Contacting companies that can pay speakers $10,000 for a single gig (part 5) 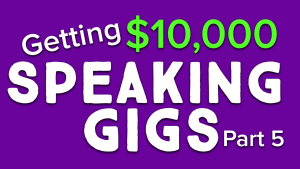 In this post, we’re going to talk about what you need to do when you’re contacting companies that hire speakers.

Read the other parts here:

At the end of this post, you will see pictures of the ‘evolution’ of my business…from the ‘sucky’ stuff, to getting to a $10,000 speaking fee level.

Lets get started on ‘what to do to get hired to speak.’

This is what separates the men from the boys. The dedicated speakers from the speakers who just ‘wish’ they were speaking for a living.

There’s no way around it…

If you want to book speaking engagements, and if you want to get that $10,000 speaking gig, then you’re going to have to contact people…a lot of people…especially when you’re starting out.

You’re just sitting at your computer sending emails, making calls, all day, every day, and everyone is saying “No, we’re not interested.” And you’re doing it for months, if not years.

It’s brutal (especially in the beginning).

But that’s the speaking business.

Not even the great Tony Robbins got around this part. Tony Robbins was working for Jim Rohn and he was making cold calls like crazy to fill seminar rooms.

However, it’s important that you do it the right way.

When I started doing this, I was making cold calls and everyone was saying no.

I was trying to sell myself over the phone but it was a lot harder than I thought. And I thought I was making 100 calls a day, only to realize I was making only 20 calls (it feels like you’re making more calls than you actually are which is why you need to track it).

If I could go back in time and re-do the way I was generating leads then I would tell myself to do soooooooo many things differently.

This is one of the reasons why a lot of people talk about having a mentor. Mentors are there to tell you what to focus on and what not to do so it saves you a lot of time. You can go at it yourself but it’s going to take you a lot longer to get to your goal if you don’t have someone guiding you.

So what would I do differently?

First, I would make sure I have my Speaker-LeadGen systems set up.

You’ve heard it before… ‘set up your systems’….and it’s true. Why? Because systems make the outcome predictable. Systems allow you to turn something into a habit which leaves more mental room open for you to improve on what you’re doing and become more efficient at it.

Because you can reach more people in a shorter time. And you’re going to have to send them an email anyways (so they can look at your website)…so why not start with the email?

I remember several times when I would talk to them on the phone and I would write down their email wrong. Maybe they said ‘d’ but I heard ‘b’ so the email would bounce back.

Or maybe they didn’t answer the phone so I had to leave a voicemail…which meant that I would have to call back when I could be spending that time contacting someone new. Little things like that matter.

So I would set up an email system.

The first email would ask ‘who’s the person in charge’ of hiring the speaker.

Then the second email would then sell me as a speaker.

I would then put them into a spreadsheet to make sure I have their contact information for a follow-up sequence.

I would also use email tools like Streak or YesWare so I could have ‘email templates’ set up and I wouldn’t need to re-write an entire email every single time. The only thing that would need to change are little details like putting their name into the email.

And because tools like Streak allow you to see when someone opens your email, I would then see who opens the 2nd email and then I would then call them up on the phone as a follow-up sequence.

Once I got a gig, I would get as much video footage out of that one gig as possible. I would set up multiple cameras and record so many video testimonials that even pro speakers would be jealous.

Then…ALL THE MONEY I got from that gig would then be re-invested back into the business.

I can’t stress that enough.

The second I got any money, I would re-invest it in two things…

Most speakers are cheap. They don’t want to spend money on anything and it holds them back (I’m not complaining…that just means less competition for me).

So if I had to go back, I would invest the money back into the business so I could get more speaking gigs.

If you’re ever in a position where you can have someone help you out and tell you what things you should be doing to build your speaking business then you better take full advantage of it. If you don’t, then expect to be building your business for years while the other speakers are getting it done in months.

Don’t believe me? Just look at speakers who are in the same place today as they were a year ago…or two years ago. They’ve been a ‘speaker’ for a long time and they’re still struggling. Why? Because they don’t have someone guiding them on what to do.

Ignore this advice at your own peril.

But there’s something I want you to really take away from this.

I want you to realize that it all comes down to having a process in place.

Anyone can say, “Send an email to a meeting planner.” But if you have a system in place then you’re going to be more efficient and more effective.

Anyone can say, “Make a Google Adwords campaign.” but if you have systems in place for getting low CPC and targeted meeting planners then you’re more likely to get booked.

It all comes down to knowing what you’re doing by having the right systems in place for marketing yourself.

The systems should be so clear that I should be able to go back in time and describe to my younger self (or describe to anyone) the exact details of what to put in an email, how to sell myself, how they’re going to respond, how to follow-up, etc. I could describe it all.

Now I also want to point something out…

I wasn’t contacting Fortune 500 companies at the time. I didn’t expect a company like Aflac to hire me for a big event when all the videos on my website sucked and the pictures were of small crowds.

Instead, I picked the low hanging fruit.

I looked for ‘corporate crowds’ but crowds of 20-100 people.

One example is a bank that hired me.

They hired me for a ‘client appreciation’ event which was going to have about 50 people. It wasn’t big and I only got $800 for it. But what I did get was more video testimonials and a client to add to my website.

Then I was able to get other events….

It all snow-balled from the smaller gigs to the bigger gigs.

You can get to a point where you have a thriving speaking business…it just comes down to knowing what to do and implementing fast.

You have to be more business-savvy than the average speaker and keep learning.

Here’s a look at the evolution of my business (unfortunately, I don’t have the REALLY bad pictures/videos because I never thought about saving them…so it’s even worse when I started)… 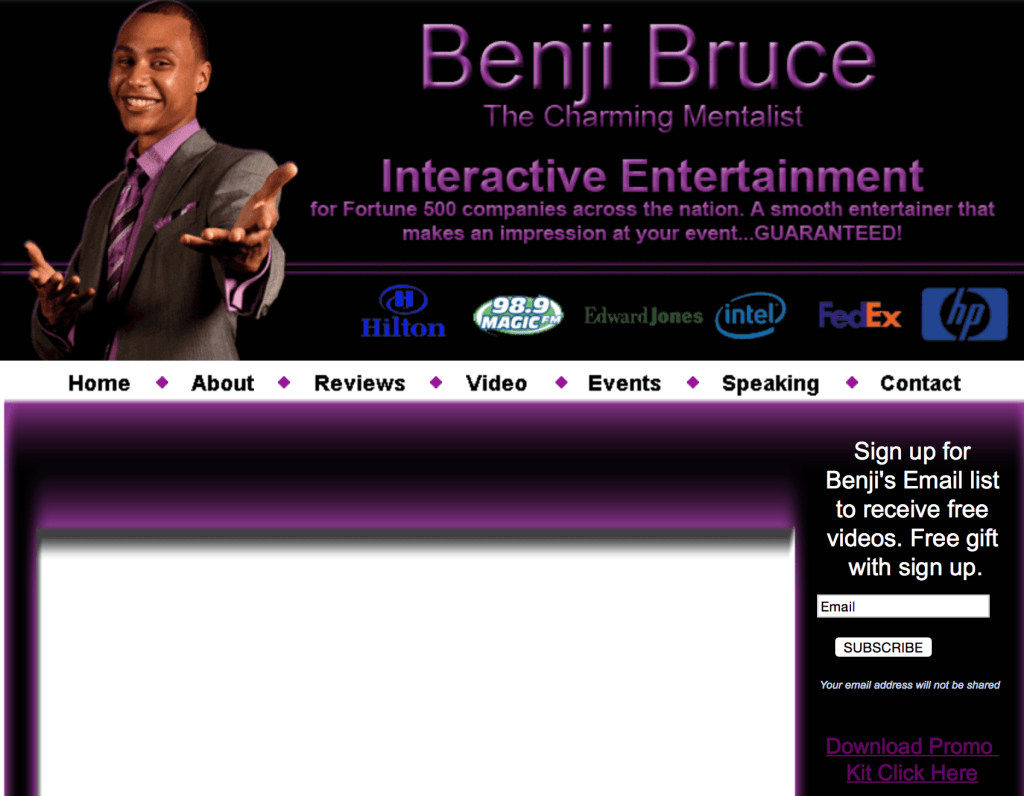 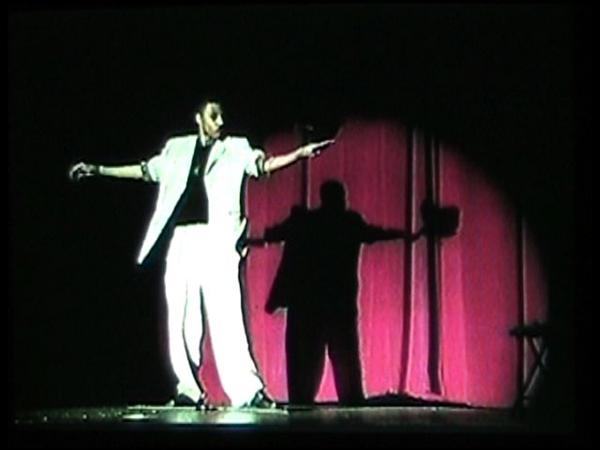 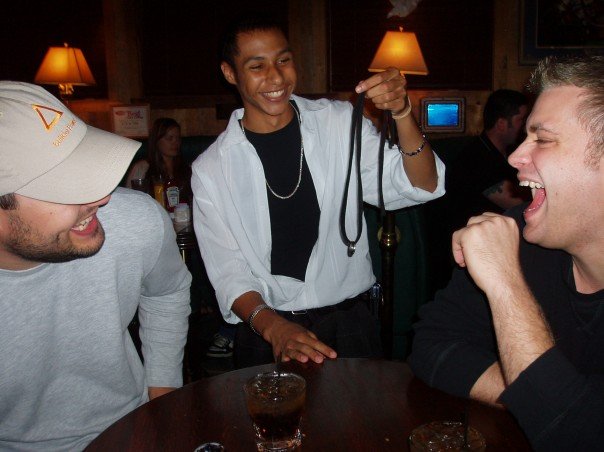 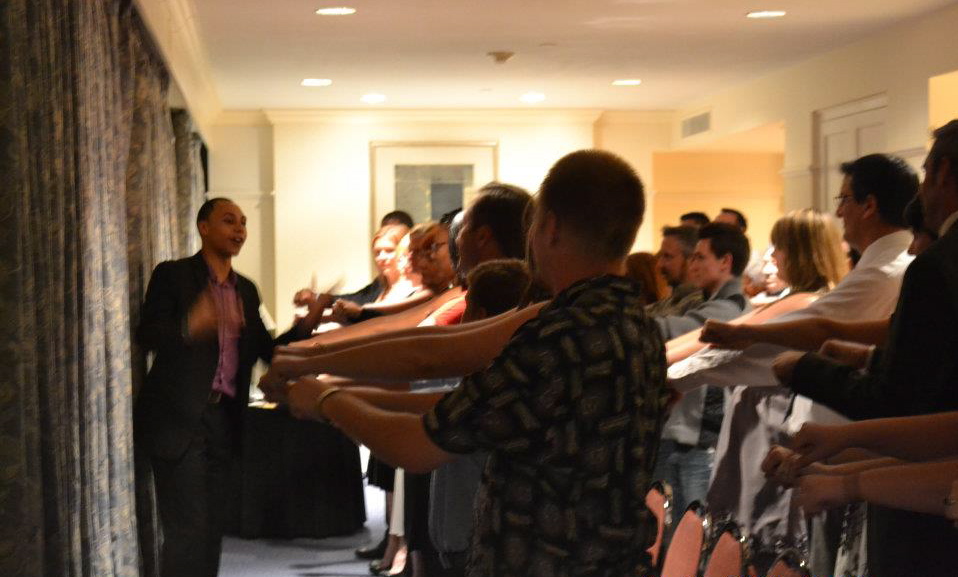 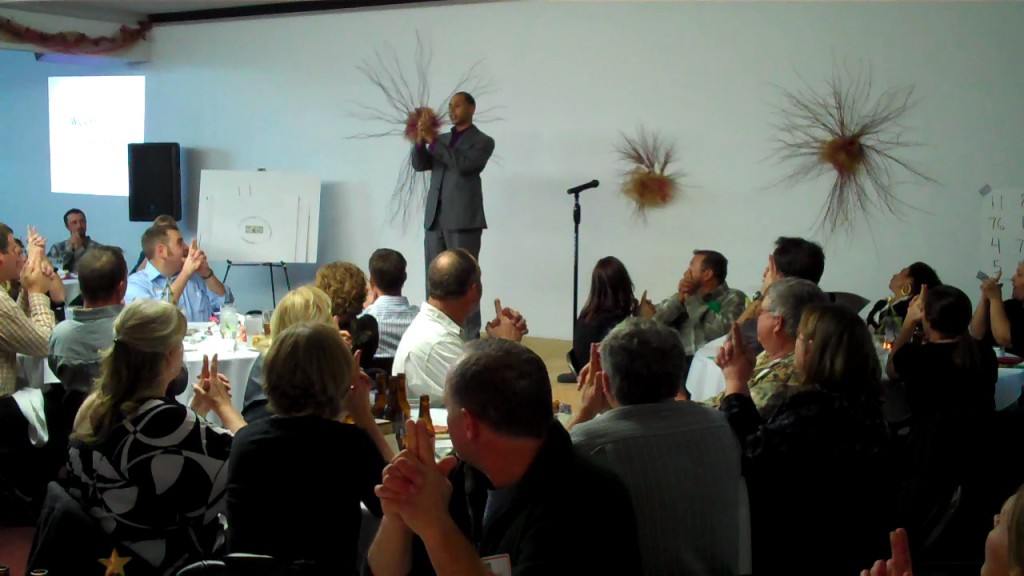 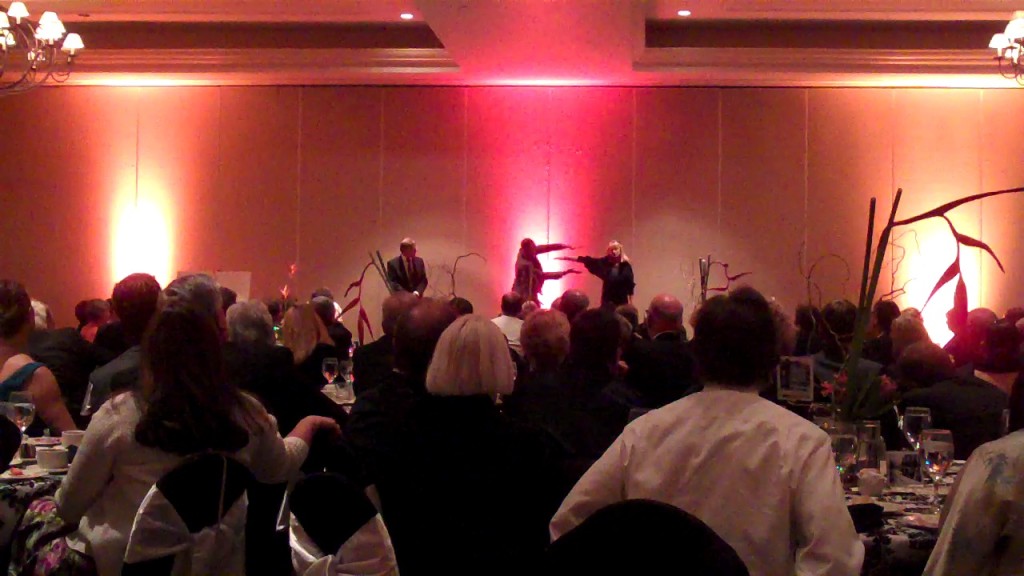 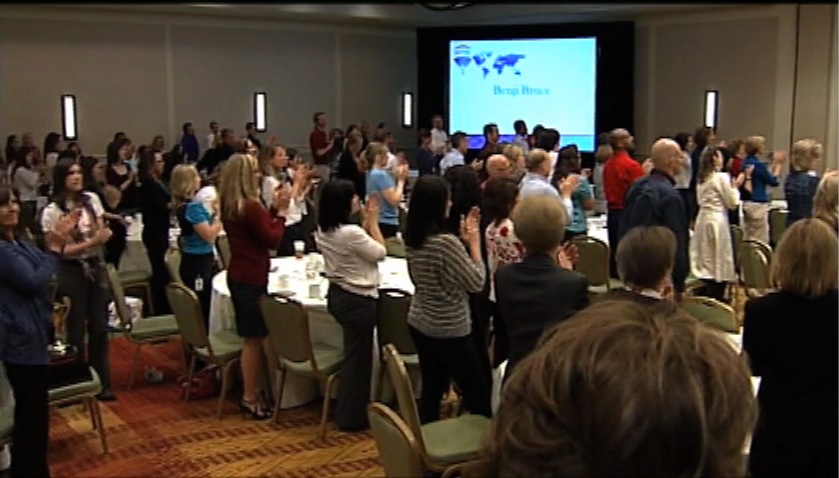 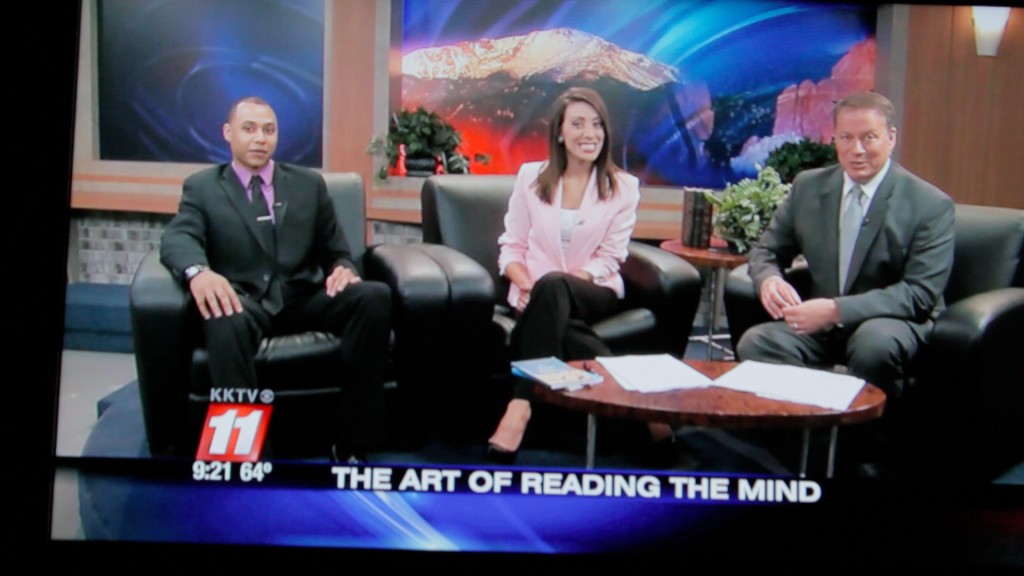 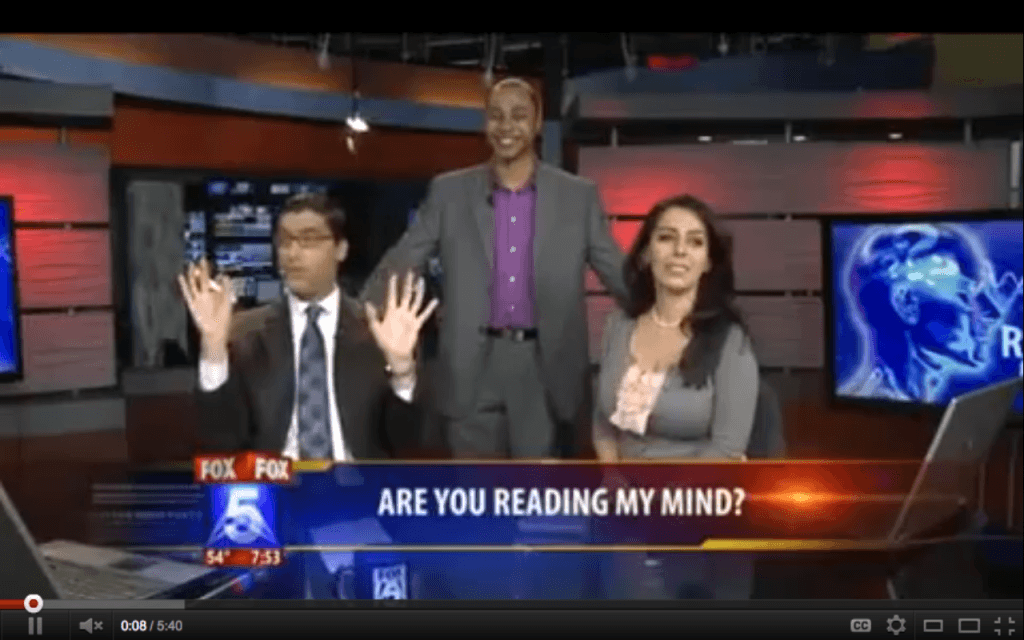 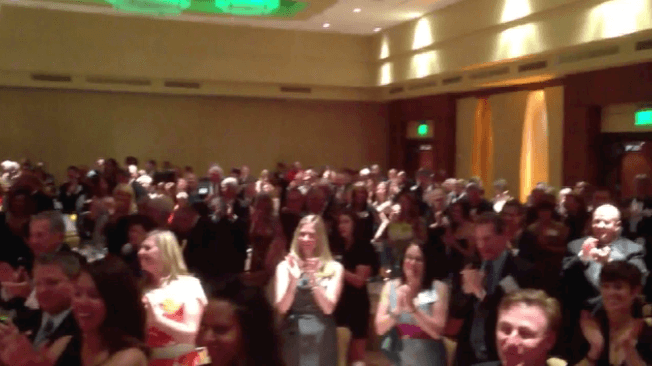 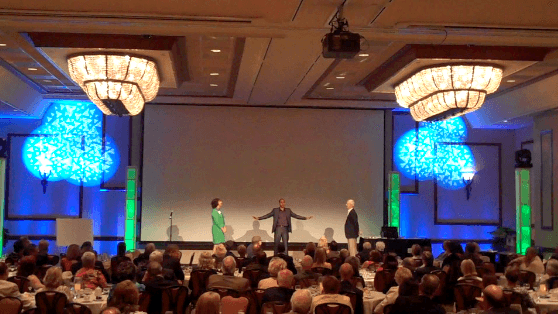 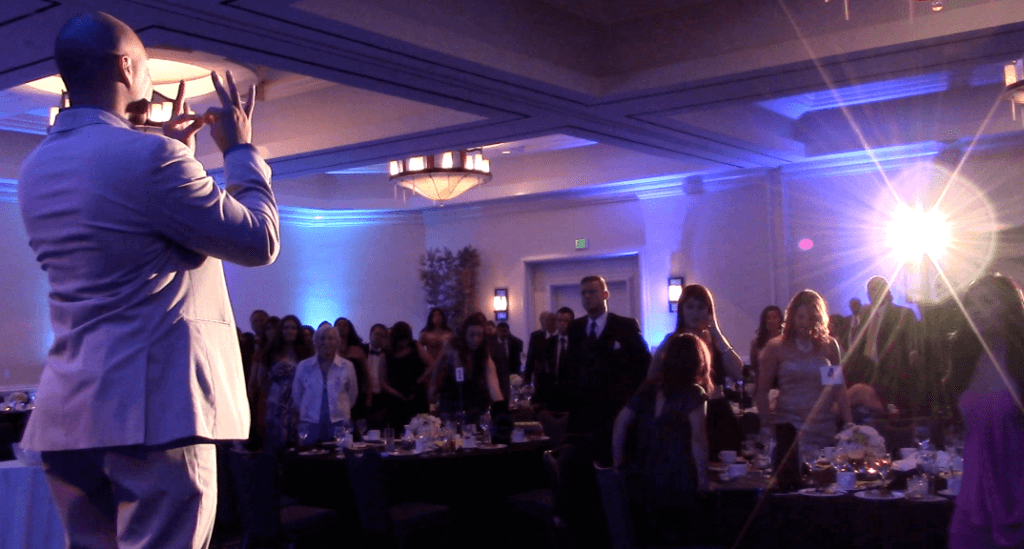 If you want more in-depth training, and you want a full plan, then join the SpeakPro Academy