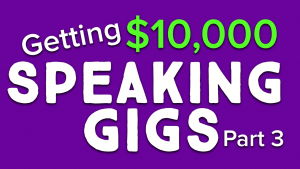 You’re about to read part 3…

So you’ve chosen a market that can afford a higher speaking fee, you’ve gotten down the psychology, what’s next?

Well…I have to say that what you’re about to read is some ninja-persuasion psychology. It’s pretty brilliant.

Let me give you an example of how Apple used this in their iPhone 6 launch.

All the hype is going around about the new iPhone coming out…bigger screens…etc. Basically, another brilliant product launch by Apple (whether you like iPhones or not, you can’t argue with results…their marketing is great).

At first, I’m thinking, “I want to spend as little as possible. I’ll go with the 16gig.” And then I immediately think, “16gigs is nothing. After I record one video that will be one gig all by itself. Then a couple of audiobooks takes up a lot of space. Then I can only have a couple of apps. And it’s all gone.”

Everyone else thought the same thing. Apple made an extra $3 billion…yup…$3 billion…by giving you a VERY unattractive offer, which caused everyone to pay an extra $100 for a little more space on the phone.

Now imagine what would have happened is they offered a 32gig, 64gig, and 128gig. What would I have done (and millions of other people)? I would have went with the 32gig because that’s enough space (that’s what I had on my current iPhone 5).

So what does this have to do with speaking?

I figured this out a long time ago by paying attention to patterns of corporate clients.

99% of corporate clients hire speakers for either a 45 minute or 60 minute presentation.

And because of this buying pattern, you can make your $10,000 speaking fee the most appealing fee.

The key thing you want to pay attention to is how unappealing the low and high ends are.

Very few corporate clients want a 30 minute presentation because it’s too short. So in their mind, that’s automatically X-ed out.

In fact, they might even ask you that question.

The same goes for the 60 minute/75 minute version. The difference between 60 minutes and 75 minutes is just 15 minutes. But the fee is an extra $5,000…so the 60 minute one is more appealing in that case.

Do you see how powerful this is?

Your pricing structure can have a HUGE effect on whether people go with the lower fee versus the fee you want them to go with.

McDonalds built their entire business with this type of psychology by saying, “Would you like to go with a large or just 40 cents extra?”

In fact, notice how they changed from medium, large, extra-large to…small, medium, large. Nowadays, ‘medium’ is more like a large. But people have gotten to used to saying medium that they don’t even realize they’re upsizing it.

‘Small’ is unappealing. ‘Large’ is too much. ‘Medium’ is just right. That’s some ninja-persuasion stuff.

Don’t start a speaking business if you’re not willing to do what it takes to grow it.

If you don’t pay attention to little things in your speaking business then you won’t have one…because other speakers will get hired instead of you.

It’s the little details that count.

You’ve chosen the right market, you’ve got the psychology down, and you’ve got your pricing down…where do you go from there?

In part 4, we’re going to get into the specific things you need to do to get on stages.