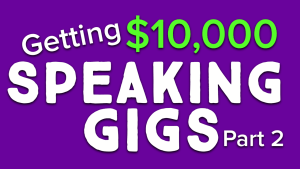 So you’ve chosen the right market, a market than can afford to pay you high speaking fees. Now it’s a matter of making sure you develop the right psychology of a high-paid speaker. What do I mean?

I know that sounds crazy and you’re thinking, “I’m worth $10,000.” But trust me…one of the hardest things for most speakers to do, when they want to charge higher prices, is to ask for it in the first place.

If you ask for a higher speaking fee in the wrong way then what happens is that you either lose the gig, or they negotiate your fee down (because you sounded like a wuss). Most of the time, you lose the gig…and that sucks.

What exactly do I mean when I say that speakers don’t do it the right way?

When going after the higher-paid gigs and asking for a higher prices, most speakers hesitate…and by hesitating…they leave wiggle room for price negotiation. This happens because their subconscious is saying, “I really want this gig, but if that price is too much, make me an offer.”

You can hear it in their tone of voice.

And more often than not, they don’t sound like they’re actually getting that price from other people. When they quote their price, it doesn’t come across as confident (like you get that fee all the time).

Do you see why that’s bad? Doesn’t it sound like a wussy is talking?

The key to having the right psychology when quoting your high speaking fee is to be in a non-needy state of mind. Meaning, you don’t need this gig (aka, you have walk-away power). And you don’t need the gig because you were smart enough to save money (hopefully you’re good with money management).

Developing a lack of neediness is crucial to getting more lucrative speaking gigs.

Remember the wussy talk? The speakers who say things like, “I could do it for $10,000”…well…lets just say that doesn’t sound confident.

By saying, “I could do it for…” means that you’re subtly asking them for permission to charge $10,000. You’re basically saying, “Is it ok if I charge this much?” And the first thing they’re going to think of is, “Hmm…well could you also do it for $5,000 instead?”

Do you see the difference?

Little things like this matter when it comes to getting high paying speaking gigs.

Let me give you a real example…a recent example…from a very well known company that hired me as a speaker. They’re paying $10,000 for a 45 minute presentation and here’s what happened…

The guy who sent me an email was already aware of me. Unfortunately for me, he came across a VERY old listing on the internet (I didn’t even know it was still there) and it had my prices around $2,500.

So when he gave me details of the event and I said the speaking fee is $10,000 for the 45 minute presentation…he said, “Oh, that’s way more than I thought. I saw your listing and I thought it wasn’t going to be more than $2,500. I do want to point out that by doing this event, you will get the opportunity to do our bigger event too.” (This is a VERY well known company btw).

Let me ask you this…do you see the problem?

The big problem was that his expectation of my speaking fee was really low. It’s like you’re going to Starbucks to buy a cup of coffee, expecting it to be $2 and then they say, “Ok great. That’ll be $50.”

You’re going to think… “What the hell?”

On the other hand, if you went into Starbucks expecting the coffee to be $3-$6, then when they say it’s $5, you think nothing of it…because you expected it.

That’s what he experienced with my prices because of a very old listing on the internet.

But did you also catch the hidden language when he said that this gig is an opportunity for speaking at their ‘big event’ too?

What he’s saying is that if I can go lower this time then they will definitely hire me for this event (at the lower price), and through the exposure, I might go to their bigger event (where I can charge more). Sounds tempting…or does it?

Let me ask you this…who does it sound tempting to?

What I mean is…

The speaker that would be tempted by that offer is the speaker who IS NOT getting $10,000 gigs and who needs the money (the lower speaking fee).

If someone offered Tony Robbins $2,500 to speak at their event and they said that he could ‘potentially’ speak at the bigger event…then what do you think Tony would say? Well…after laughing his ass off, he would think about how he gets higher paying speaking gigs in the first place, so the offer doesn’t tempt him at all.

On the other hand, a speaker who’s just starting and can barely get a $500 gig, would easily accept it.

So how did I respond when he said that the speaking fee was more than he expected and that (hidden language) if I lowered my fee then it could be a great way for me to get on their bigger stage?

I just said, “Yea it’s a lot. But the presentation will blow everyone away.”

End result…he got permission to get the full $10,000 and I’ll be speaking at their event.

Do you see the difference in psychology between a speaker who expects to get paid $10,000 versus a speaker who’s not used to it?

Your state of mind is not about you saying affirmations to yourself about how you’re worth $10,000 as a speaker. That has nothing to do with how confident you come across.

Your state of mind is completely dependent on your lack of neediness for the $10,000.

You can say all the affirmations you want, but if you only have $2 in the bank and rent is due next week, and your car broke down, and you don’t have food in the fridge…then the second someone says, “I’m sorry, we only have $300 and can’t pay $10,000.” Then guess what? You’re going to accept it.

Save money in your bank. Cut back on expenses (like going out to eat, going to the movies, etc). Live like a broke college student…for now…and before you know it, you won’t ‘need’ the money so you won’t budge on your speaking fee.

Take a look at billionaires. Billionaires have what they call “F*ck You Money.” Basically…they don’t give a hoot what you think…because they don’t need anything from you. It’s a powerful state of mind that allows you to do things because you want to do it, not because you have to do it.

After you get the psychology down, the next step to getting $10,000 is…