Is it possible to get testimonials in a way that gets you more speaking engagements and keeps you booked?

Of course it is. But how do you get great reviews that attracts more clients to book you to speak and keeps you calendar full?

Testimonials have been my secret weapon for getting corporate speaking engagements. Think about it from the standpoint of the event planner…

I need to hire a great speaker but how do I know if this speaker is good?

That’s the key questions you must answer to get booked on corporate stages…but how do they know you’re good? Testimonials gives the event planner an answer to that question but how do you get killer testimonials? What’s the difference between a good testimonial and a bad one?

Here are the different types of testimonials that can help you get speaking gigs:

The presenter testimonial is when someone talks about how great you were at their event. Maybe they say you were awesome sauce and their eyes lit up…but in one way or another, they’re talking about you and your presentation. These types of testimonials do a great job in selling your “personality” as a speaker.

You can see an example of this type of testimonial in the video (you only need to watch the first testimonial). Notice how Marnie from Remax gave a Presenter Testimonial because she was talking about how amazing it was.

Also take note on how expressive she was. She didn’t just say “That’s amazing”….she expressed it. Her eyes got big, her hand movements changed, her entire body language shifted to express the emotions rather than just the words. Those are the best testimonials for the Presenter style because it’s one thing for them to say you’re amazing, it’s another for them to express it.

These testimonials are powerful because if an event planner wants to hire you to speak then they want to know what type of responses you get from the audience. If people are constantly mentioning how the audience gave you a standing ovation and how they loved the presentation then the client who is watching the video is more likely to hire you because they want that type of response at their event.

Self-interest testimonials are powerful because it tells the event planner what they get out of it. It’s one thing to have people talking about how great you and how the audience responded by giving you a standing ovation but it’s another to have the person who hired you talk about the result you got for them.

In this example, you see a guy named Zack Childress (a very cool and funny guy) talk about what happened as a result of having me on his stage.

These testimonials are some of the best because people take action when you tell them what they get out of it. You will also notice that the words Zack used were very specific. He didn’t just say, “It was amazing”…he got more specific about what happened as a result of hiring me.

These testimonials can be spread out on your website but it’s important that people see who it came from because you always want to associate with top corporate clients. On my website, there is a header that has a quote from Fox and that is an example of a Social Status Testimonial. 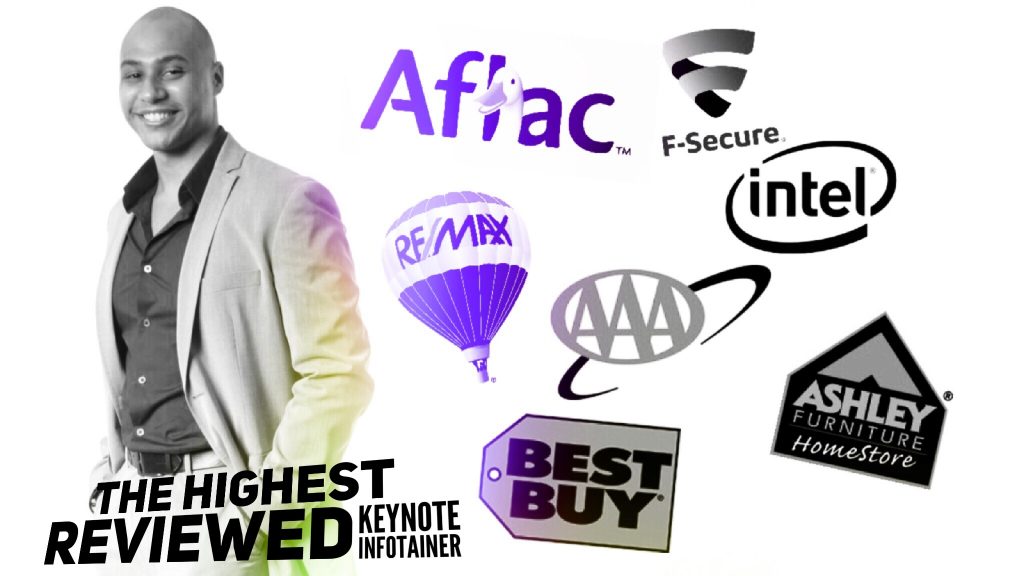 The difference between the testimonials are subtle and you need all of them to build up tons of social proof so you can get hired as the speaker.

When you have tons of testimonials, people who hire you to speak will be lead to one conclusion…this guy must be amazing. You want to have so many testimonials that people can’t watch all of them unless they want to sit down for a couple of hours…and that is the secret to using testimonials in a way that gets you more speaking engagements.