What if you don’t have enough experience to call yourself an expert? 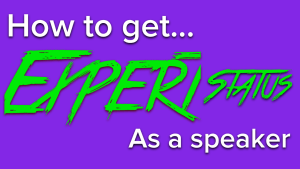 A lot of people want to be speakers but they don’t feel like they’re an expert at a specific topic. Maybe they know a lot about a lot of things, but they’re wondering what their expertise should be…or if they even have one.

So what do you do?

If you don’t have enough experience to be an expert then you’re screwed….just kidding.

Here’s what you do.

First, you have to understand that there are different kinds of experts.

There’s the ‘Master’ type of expert…which most people think of…who walks the walk.

The Masters are the Michael Jordans, the Bill Gates, the Mark Zuckerbergs.

These are the experts that can talk about a subject because they’re living it.

And when speakers think in terms of an expert, they think they need to be Michael Jordan to talk about basketball…or Bill Gates to talk about being a bilionaire.

But then there are the ‘Coach’ experts. These are the people who studied the crap out of a specific topic and now they know everything about it. They might not be able to do it, but they’re definitely an expert on it.

These are people like, Phil Jackson (Michael Jordan & Kobe Bryant’s basketball coach), Tony Robbins (when he started), and Malcolm Gladwell.

There’s a quote in The Art Of War, by Sun Tzu, that says,

One may know how to conquer without being able to do it.

Most people confuse knowing something with doing it. But doing something requires a completely different skill than knowing it…but…that shouldn’t discount the knowledge itself.

Let me ask you this…

Who would you rather have as a basketball coach…Michael Jordan? Or Phil Jackson?

If you picked Michael Jordan then you’re wrong.

Phil Jackson has coached Michael Jordan and Kobe Bryant…but he can’t beat either of them in a game. In fact, Phil Jackson can’t beat anyone in the NBA…but that doesn’t mean you should ignore his advice.

Just because he can’t do something (aka beat them in a game of basketball) doesn’t mean he isn’t an expert on it.

What does all this have to do with you as a speaker?

Most speakers think they have to be Michael Jordan to be an expert and this holds them back from claiming the ‘expert’ status. But in reality, most experts are the Phil Jacksons of the world.

You don’t have to be able to do something to be an expert on it (remember…Phil Jackson). You just have to have TONS of knowledge on it. And this knowledge is what helps create a transformation inside someone who has the ability to apply it.

Every single athlete can beat their coach.

Tiger Woods can beat his coach in golf. Michael Jordan can beat Phil Jackson in basketball. Floyd Mayweather can literally beat his boxing coach. But…they all have a coach. Why? Because they realize that expertise is about providing perspective on how they can get better.

Tony Robbins studied hundreds of books and became an expert in human psychology.

Malcolm Gladwell studied tons of successful people and wrote books on his observations.

If you’re a speaker and you think you don’t have enough experience to be an expert then you need to become a ‘Coach’ expert. Study other people’s experiences and reveal what you learned.

Also, just because you’re not an expert right now doesn’t mean you can’t be an expert.

I highly doubt that Tony Robbins started speaking after he read 700 books. He read a few books, then started speaking, and then read more and more. He grew into his expertise…he didn’t wait for it.

The same goes for you as a speaker.

Being an expert has more to do with your psychology than anything else. The only reason you’re not an expert is because you don’t believe yourself to be one.