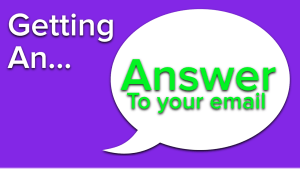 You’ve probably wanted to connect with high-level people and haven’t gotten your email answered. Or maybe you want to connect with someone but you’re not exactly sure what to say when you email them.

So how do you get an extremely productive person (aka high-profile people) to answer your email?

It’s important you understand the difference between being busy and being productive.

How do you connect with a millionaire? Or a billionaire?

These are very productive people who don’t just say their time is valuable, they actually treat their time as something valuable. So if you want to connect with someone, you have to know how to talk to them…and I’m going to show you.

I constantly tell speakers to email me because I want to know what you need help with. This lets me know what to post on the blog, what training you want, etc…but…and this is a big but…if you want a response, then you have to communicate in a very specific way (I read all my emails but I don’t respond to all).

Before you start to communicate with an extremely productive person, you have to know how they think…once you understand their thought process, then communicating with them is easy.

Productive people know what they need to get done so anything outside of that realm is a distraction…which means they’re not going to pay attention to it.

Productive people are extremely focused…a tunnel-vision type of focus…because they have to be. And if you want to break that tunnel-vision then you better have something important to say.

In some form or another, a productive person knows what their time is worth.

(note: that statement might have offended some people but you have to realize the different between what things ‘should’ be like and how things really are)

Once you understand this, it’s much easier to communicate with extremely productive people.

The first thing you’ll notice about me is that I’m very direct.

If we do a teleseminar, you’ll notice that I get straight to the point. I don’t go on about me, telling you my back-story, etc…I just tell you exactly what you need to know so you can get to work immediately and so I can get back to work.

Because if you truly value your time (and you’re not just saying it, but you mean it) then you won’t want to waste time. If you can say something in 20 seconds, versus 2 minutes, then say it in 20 seconds. And the only way to do that is to be direct.

This is also why a billionaire would rather text instead of talk on the phone.

When you talk on the phone with someone, they’re more likely to say things like, “Hey how’s it going? What’s new in your world? Etc etc.” But when you text, you get straight to the point.

There’s a speaker named Bill Walsh…and I remember when I first got his number and gave him a call. He didn’t answer. Instead, he sent a text and said, “What’s up?” (or ‘What do you need?’…I can’t remember the exact words).

Now most people would have thought… “Hmm that’s rude…why won’t he talk to me on the phone?” And they might have not liked him.

But I instantly realized that he’s an extremely productive person because by texting, it forces everyone who communicates with him to cut out the crap and get to the point.

In one simple text, he taught me a lesson that I use to this day (this is why my responses to emails are straight to the point).

If you want a response from an extremely productive person then you need to be very clear about what you want.

Don’t beat around the bush, just be very clear about what you want.

The easier you make it for someone to respond to you, the more likely they are to respond.

Before you contact a productive person, think about the question you’re going to ask.

If you ask a dumb question, you won’t get an answer.

This is one of the reasons why I tell a lot of speakers to read the blog before asking a question before more often than not, the answer is in the blog.

If you ask a question, and the answer is already on the blog, then that just tells me you didn’t have the determination to read every single blog post…and this tells me that you’re not serious about doing what it takes to grow your speaking business.

People who don’t ask smart questions don’t want to think through the questions they ask.

In Daniel Kahneman’s book, Thinking Fast & Slow, he talks about how our minds are naturally lazy. Our minds don’t want to do mental work…unless it has to. Here’s an example…what’s 2+2? You instantly know it’s 4.

You probably didn’t even try to answer that question. It’s not that you can’t do it…it’s just that you don’t want to. Your mind doesn’t feel like doing the work…so it doesn’t.

This ‘lazy mind’ applies to everyone…but if you want an answer from an extremely productive person then you have to be willing to break through the mental laziness by thinking about your question before you ask it.

Most people give in to the mental laziness and prefer to let other people to do the mental work for them.

When someone asks me, “What demonstration can I do in my presentation?”…I know that they’ve given in to the mental laziness (we all do it…you just want to do it less than 99% of the people out there).

Why is that a bad question?

Think through your question before you ask it.

This is the best way to guarantee that you’re going to get them to respond to you again.

Productive people hate it when someone asks for advice and the person doesn’t do it.

Of course you don’t have to do everything someone tells you, but you need to take the next step after you ask for advice. If it looks like you’re in the same spot as before…that just demonstrates you’re not an implementer. It tells them that you’re a time-waster.

People who are serious about something and really want advice are implementers. If you want to know how to get speaking gigs, and someone gives you the answer, but you don’t do it…then this tells the high-level person that you won’t implement what they tell you next.

If someone tells you to build a better speaker website and you don’t do it. This lets them know that you won’t put together lead-generation systems for getting gigs either.

So whatever you do, if you get an answer to your question, you need to implement and ask the ‘next’ question.

If it’s the first question you’re asking them, then you need to indirectly let them know that you’ve done your homework first. Let me give you an example of when I contacted Mark Cuban…

I know that Mark Cuban uses his Cyber Dust app. So I got ahold of his username and I wanted to know what books he reads. But, I also knew that the question I ask has to allow him to give a quick answer (basically…it shouldn’t take him more than a sentence to respond to my question).

I also knew that I had to let him know that I did my homework.

And here’s what I asked, “How do you stay sharp? Do you read books like The Fountainhead, or tech magazines?” His response, “Yes to all.”

I knew that one of his favorite books is The Fountainhead…so by including this book in the question, it lets him know that I did my homework.

A friend of mine also wanted to ask Mark Cuban a question so I told him to make sure he’s direct and asks a question that requires a short answer. He asked about a stock…and he got an answer.

If you ask a question that requires a long answer then you won’t get one.

Remember, time is valuable. So the only way a productive person will give a really detailed answer is if you’ve invest in one of their high-ticket programs.

I’ve had speakers ask me if I can help write their speech, put their lead-generation systems in place to get gigs, and more. Not only have they not invested in the SpeakPro Academy, but most of them haven’t even bought a the Booked UP ebook. And since these questions require long answers I don’t answer it.

This is probably one of the biggest mistakes I see speakers (and people in general) make when sending an email.

If you want a response from an extremely productive person then you need to ask a very clear question…never make a statement.

You would be surprised at how many people say things like, “I just need help with my speaking business.” And then they email again a few days later saying, “Hey, why didn’t you answer my email?”

If you want a question answered, make sure you ask one.

Take all of this advice to heart and from now on, pay attention to mindset of productive people. Once you truly understand what’s going on in their head, then it’s much easier to get a response.

You have to be direct, clear, think through your question before you ask it, and ask a question…don’t a statement…

…And then…don’t be surprised when you get an answer.