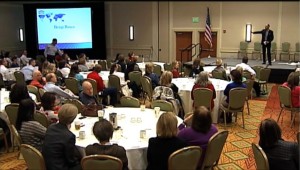 The way a professional speaker starts their presentation is crucial to the success of it.

If you start out bad, the audience will hate your guts (ok maybe not to that extent but you will have a hard time winning them over if they think you’re boring). Here are 4 powerful ways you can start your presentation:

A patter interrupt is something you do that’s so different than what people are used to that it jolts their brain to pay attention.

Think about what most speakers do when they get on stage…

They usually say hi to the audience and talk about how great it is to be there. Audiences are used to this so how can you create a pattern interrupt from the get-go?

You can walk on stage and the second you’re center stage…BAM!…the lights shut off. That’s when you start speaking about how what you’re going to show everyone is going to bring them into the light. That the things you’re going to impart on the audience will forever change their life…and it was all because you had one idea. Just as you say this, a tiny lightbulb lights up in your hand and…

How can you not pay attention to that?

What happens when you’re sitting in a room and all the lights shut off? You immediately snap to attention. That’s a simple example of a pattern interrupt and you can come up with all kinds of things to capture your audiences attention before you speak.

The demonstration tactic is when you…

A cliff hanger is when you open a loop to something but you don’t close it. Think about what great TV shows do…just as the episode is about to end, they put the hero in a dangerous position and then say, “Stay tuned for the next episode.”

Cliff hangers are powerful because the mind wants closure and when you build on the curiosity of the mind, you immediately control it’s focus.

You can start your presentation by saying something like, “Pay attention to that box over there, it’s going to be very important in just a second.” And by doing this, you’re putting attention on the box but you’re saying that you will come back to it later. Your audience will then start to wonder what’s in the box and why you mentioned it.

As a professional speaker, you can have several cliff hangers throughout your presentation (just like they do in TV shows when they leave you hanging and cut to a commercial). You can do this with words by telling your audience to remind you about the story of the chicken, the duct tape, and a guy named Bubba…doing this will cause your audience to wonder what kind of weird story involves those three and once again, you have their attention.

The demonstration tactic is about audience involvement.

One of the ways I start out my presentation is to get the audience standing up and to grab a coin from their pocket because I’m going to demonstrate the power of influence on everyone…all at once.

Getting people involved immediately breaks up the monotony of the event because you’re doing something different. And when you demonstrate what you do, rather than just talk about it, you become a more credible speaker because anyone can have book knowledge but not everyone knows how to use that knowledge. Your audience would much rather learn from people who are doing, rather than talking about it.

Oh the good ole story. Story telling is an easy way to start a presentation because our brains are wired to listen to stories. We want to know where the story is leading to and we relate the story to our life in some way or another.

If you want to see a good story teller then listen to Joel Osteen…he almost always starts his presentations with a funny story. The video below is a montage of funny stories from Joel Osteen…